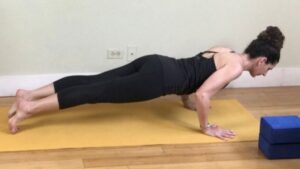 I will load each week’s content below in the tabs. The most current week will show first in blue, but you’ll be able to click the boxes in grey beside the blue tab to view previous content.

Let’s start with the video! I will take you through a flow with no upper body…until the end, where you will want a wall and a chair close by. This class is ideal for anyone who wants a break for their shoulders or wrists and also wants to progressively strengthen their Chaturanga (that’s where the wall and chair come in handy). Most of the playlist is instrumental music by DJ Taz. Click here to go to my website for the video.

As you lower down into Chaturanga, attempt to scrub the mat forward with the hands. Note that your hands won’t actually move as you do this because it is an isometric “movement”/contraction.

Why?
Dr. Ray Long say that this forward scrubbing action of the hands activates the biceps and brachialis muscles, which helps stabilize the elbows.

You may also hear to drag your hands back as you lower down to Chaturanga. There is no absolute right or wrong here. Different cues activate different muscles so it depends on where your strengths and weaknesses are, as well as your intention for the pose. Try these cues as you practice and see how they feel for you!

As you scrub your hands forward, simultaneously pull your shoulder blades down your back. These two actions are like peanut butter and jelly – they go really well together and are great for elbow AND shoulder stabilization!!

Question – are you someone who lowers more than halfway down in Chaturanga? If so, make sure to read this week’s Favorite Find to gain an understanding of why we use the cue to “lower down halfway” in Chaturanga so often. You will also get an orthopedic surgeon’s take on it! Click here or on the image below to go to this article by Jason Crandell.

“Let It Snow” by Filous

“Strive to be the first: first to nod, first to smile, first to compliment, and first to forgive.”
– Anonymous

As you lower into Chaturanga, let your wrists line up BETWEEN your elbows and your shoulders, rather than wrists under elbows. Refer to the pic below. In other words, DON’T SHIFT FORWARD in Plank before coming into Chaturanga! Yes, I said it!!

Why?
David Keil, author of Functional Anatomy of Yoga, says, “the further forward the shoulders are from the hands, the more strain there will be in the shoulders, because the bulk of the upper body is too far forward to be supported by the hands. Therefore, do not apply yoga’s general rule of stacking the joints to the wrist and elbow in Chaturanga. This position also increases the wrist angle and can cause problems there too. Most people should have their elbows slightly behind their wrists.”

I know you are thinking this is contrary to what you have previously learned and may be having some serious doubts about this. Like everything else, take what he says into consideration and try it on for size. Having your hands a little closer to the shoulders may help you or your students who have wrist and/or shoulder pain. This doesn’t mean that having the elbows directly over the wrists is a bad cue, it just may be harder on the joints for some people.

To further experiment with your alignment in Chaturanga, check out this week’s Favorite Find. This YouTube video explains how to use a strap and blocks when you practice Chaturanga.

I’ve been working with these props in some of my online videos this month and am already receiving feedback about how helpful the use of blocks are for Chaturanga! Did you miss last week’s online class? If so, before we start to flow, I begin with a 10-minute mini-training on how to stabilize your shoulder blades for a stronger Chaturanga. Click here to take the class!!

If you or your students complain of wrist pain, try using push-up bars (very easy to keep at your studio) to take the extension out of the wrist. You can keep the bars right at the top of your mat and flow through a class quite comfortably using them the whole time. Your palms would be facing each other as you take chaturanga with the bars. You can also use a carpel tunnel brace around your wrist, which has an insert that helps elevate the wrist when in Downdog and other poses where you bear weight on the hands. I practiced with both of these for close to a year when my wrists were bad and, while it took a few classes to get used to, it really helped!

“Mindfulness helps us to recognize when we have habits that are harsh and creates a gap between that impulse and that action that usually follows. It creates a space for us to dip into our hearts and come back up with a pearl of kindness.”
– Cyndi Lee

This week I have a 60-minute flow class for you with pockets of strength work to help your Chaturanga. The first 10 minutes of this practice is a mini-workshop, where I share some tips on how to strengthen (and modify) your Chaturanga. Click here to go to my website for the video. Enjoy!!

I regularly read a book or an article from a physical therapist or yogi who specializes in anatomy whose views conflict with the traditional cues for yoga poses. It’s maddening! How do we know what information is correct? Who do we listen to? Let’s take Chaturanga…should you only lower halfway down? Should you keep a 90-degree bend at your elbow joint? Should you hinge forward from Plank before lowering down?

If you’re interested to hear what the “experts” have to say about these Chaturanga cues, I wrote a lengthy article where I both share and analyze these cues. Click here to go to the “About” section of my website to read this blog (and any of my other blogs that may interest you).

You can also check out this week’s Favorite Find – an article by Robyn Capobianco, Phd and Jana Montgomery, Phd. They weigh in on jumping back to Plank/Chaturanga and share their beliefs on which is safer. They base their opinions on a really cool method that includes hooking themselves up to electrodes to get a reading of how much weight is going into the shoulders and other joints in both variations. Fascinating!! Click here or on the image below to read all about it!

I hope you are enjoying the beauty of this season change. “Autumn is a second spring where every leaf is a flower.” – Albert Camus

While in Plank pose, before lowering into Chaturanga, pull your armpits towards the back of your mat and squeeze your inner armpits towards each other – as if you had a newspaper under each armpit that someone was trying to take away.

There are quite a few muscles that help stabilize the shoulder blades on the back – the latissimus dorsi and lower trapezius being two of these larger muscles. The cue to pull your armpits towards the back of your mat engages the lower trapezius. Jennilee Toner, teacher of yoga and human anatomy and the author of “The Perfect Chaturanga: A Comprehensive Guide to the Human Body Through the Practice of Vinyasa Yoga”, asserts that the engagement of the trapezius helps “to free the clavicle area of unnecessary and possibly injurious tension and compression.” The cue to squeeze your armpits in towards each other engages the lats, giving you more power and stability. Jennilee also says, “the latissimus dorsi draws the humerus in so that the head of the humerus can be in line with the distal end of the elbow joint.”

The moral of the story – let’s take advantage of these bigger muscles when practicing Chaturanga to keep the shoulder joint stable and safe!

For more tips on how to strengthen and prep the body for your safest Chaturanga, check out this week’s Favorite Find.

Stand with your arms out in front of you, parallel to the floor, with your ears in the same plane as your shoulders. You’re recreating Plank pose while standing upright. Now, keeping your shoulders still, begin to activate the cues above (armpits in this stance will pull down towards the ground). Then, bend and straighten your arms, like you are practicing Chaturanga with no weight on the arms. The tip is: while doing this, don’t let your shoulder blades move; the movement is only at the elbow joint. Praticing the stability of the shoulder blades while standing makes it easier to feel the action you want when actually lowering into Chaturanga.

“Your mind is a powerful thing. When you fill it with positive thoughts, your life will start to change.” 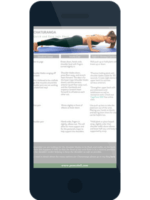 Enter your name and email address and receive my free PDF!

* You will also receive my quick and inspiring newsletters each week. You can unsubscribe at any time.

7 Days to Up-Level Your Classes

Get out of your rut and inspire yourself and your classes! I will share inspirations and favorite finds that I don’t share anywhere else. And if you’re not in a rut, you will still grow as a teacher…no mater how long you’ve been teaching.

* You will also receive my quick and inspiring newsletters twice a month. You can unsubscribe at any time.

Find more confidence in your crow pose in 6 days!

* You will also receive my quick and inspiring newsletters twice a month. You can unsubscribe at any time.